Resistiendo, Inc., is now a 501(c)(3) organization. Your donations are tax-deductible. Please help us fight to keep Kinder Morgan’s pipeline off our land! Visit our Donations page for the mailing address for donations.

If you have been approached by a company requesting an easement, please read this article from the University of Kentucky.

We now have an e-mail address!

In Texas from 2003 to 2014, Kinder Morgan experienced 36 “significant incidents” resulting in fatalities or hospitalization, fires, explosions, or spills.[18]

Throughout the U.S. since 2003, Kinder Morgan and its subsidiaries’ pipelines have been responsible for at least 180 spills, evacuations, explosions, fires, and fatalities in 24 states.[19] Some examples (also including spills in Canada):

plus some of KM’s BC accidents

•    July 15, 2005: About 210,000 litres of crude were released into the area surrounding the company’s Sumas Mountain storage facility in Abbotsford, making its way into Kilgard Creek.
•    July 24, 2007: An oil spill occurred along the Kinder Morgan pipeline in Burnaby when a construction crew inadvertently hit the unmarked pipe with an excavator. Almost 250,000 litres (about 1500 barrels) of oil shot out of the ground, soaking a residential neighbourhood and seeping into the Burrard Inlet. At least 50 homes had to be evacuated. (Click to view the BC Ministry of Environment Incident Report)
•    May 6, 2009: A sizeable spill was discovered at the company’s Burnaby Mountain tank farm, with almost 200,000 litres leaking out into the facility.
•    January 24, 2012: A pipeline rupture at the Sumas Mountain tank farm spilled an estimated 110,000 litres of oil. Local residents reported health problems including nausea, headaches and fatigue, and schoolchildren were kept indoors for fear of airborne toxins.
•    April 3, 2012: Another spill in a “containment area” at the Abbotsford Sumas Mountain facility caused nuisance odors and air quality concerns in surrounding communities.
•    June 12, 2013: A leak was discovered on the Kinder Morgan pipeline near Merritt, BC.
•    June 26, 2013: Just two weeks after the spill near Merritt, yet another leak was discovered – this time spilling up to 4,000 litres of oil at a site near the Coquihalla Summit, about 40 km east of Hope, BC.

This is about Natural Gas but applies to us as well. http://www.stopthepipeline.org/news-about-the-constitution-pipeline/banks-imposing-large-buffer-zones-around-homes-as-a-condition-for-mortgage/

This is what will happen here if they put a pipeline anywhere near our arroyos. These are photos of numerous exposed pipelines ( to include the Cortez pipline ) in Placitas, 2006. 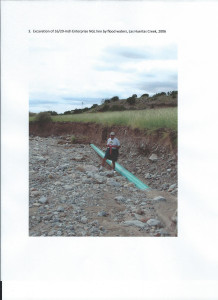 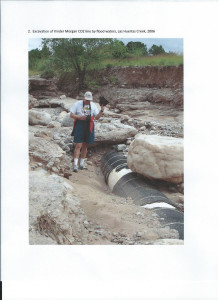 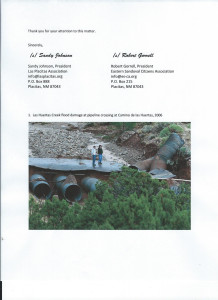 The BLM has a lot of the same concerns that we have voiced yet they do not acknowledge that in our meetings with them. http://www.blm.gov/pgdata/etc/medialib/blm/nm/resources/rac/rac_minutes.Par.10825.File.dat/ABQ%20RAC%20Minutes_Dec2013.pdf
The carbon dioxide will be transported as a supercritical fluid under highly pressurized conditions.  Due to the highly pressurized conditions, a complete shear or rupture of the pipeline may displace the soil above the pipeline.  Upon release and adiabatic expansion, it is estimated that approximately 75 percent of the carbon diixide volume within the affected pipeline segment will be discharged as a gas.  The remaining 25 percent of the carbon dioxide volume will solidify, then vaporize slowly, resulting in a gaseous release into the atmosphere.

KM pipeline put on hold in the NorthEast, can we do this too? Key was owners not letting Kinder Morgan survey their land and lots of PROTESTS!

Kinder Morgan to scrap partnerships ( they developed this concept in the energy sector): http://www.bloomberg.com/news/2014-08-10/kinder-morgan-merges-oil-gas-pipeline-partnerships.html

Representatives from Kinder Morgan will be hosting a series of public presentations that will provide a detailed overview of the Lobos Pipeline project, as well as address questions and concerns from the general public.

The project will be placing newspaper advertisements in the impacted counties, and below are the dates/times/locations for these events:

We welcome your attendance at one, or all, of these presentations.  Thank you!

http://www.nytimes.com/2014/08/01/us/questions-about-pipelines-and-private-property.html?ref=todayspaper
CO2 is not the only substance KM wants to transport, Helium is next.http://www.azjournal.com/2012/05/25/helium-shortage-looming-and-northeastern-arizona-can-help/
–