The SunZia Southwest Transmission Project’s long, winding road to commercial operation is facing a new round of controversy, this time from an array of community groups that fear the huge transmission line will inflict irreparable environmental damage, fundamentally disrupting wildlife and the livelihood of residents along the central Rio Grande.

THIS IS A VIDEO EXPLAINING WHAT IS HAPPENING NEAR CHACO CANYON. FULL-FORCE FRACKING OPERATION WHILE THE BLM LOOKS THE OTHER WAY, IGNORING THE PROPER PROCESS. PLEASE WATCH:

HELP support our Navajo neighbors who are not being heard while their WATER and sacred lands are being destroyed.
http://doodafracking.org/

Albuquerque, NM–In a letter to the Bureau of Land Management (BLM) Socorro Field Office, dated February 2, 2015, Kinder Morgan, Inc., withdrew its application for a right-of-way grant for the Lobos CO2 Pipeline. The pipeline, as proposed, would have originated in the St. Johns CO2 field in Apache County in eastern Arizona and terminated at the existing Cortez Pipeline in Torrance County, New Mexico.

According to Kinder Morgan, the project timing is being reassessed because of current market conditions related to the significant decline in oil prices. Kinder Morgan states it will continue to re-evaluate the timing of its planned investment to develop the St. Johns source field and construction of the Lobos Pipeline, as well as the related expansion of the southern portion of the Cortez Pipeline to accommodate future required CO2 capacity from the St. Johns field.

The BLM is no longer processing Kinder Morgan’s application for a right-of-way grant. Additionally, the BLM notified Kinder Morgan that it would still have the opportunity to file a new application for a right-of-way grant at a later date, if market conditions provide such an opportunity. Should a new application be filed, the BLM would initiate a new National Environmental Policy Act review. The public would be notified of this event through publication of a Notice of Intent in the Federal Register.

The BLM thanks all those who provided comments and participated in this process. Questions may be directed to the Senior National Project Manager Mark Mackiewicz at (435) 636-3616 or mmackiew@blm.gov. 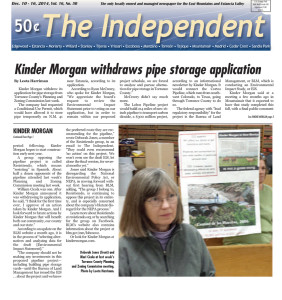 At the Dec. 3 Torrance County Planning & Zoning Board meeting, Kinder Morgan withdrew its application for a conditional use permit to build a pipe storage yard south of Estancia. KM spokesperson Ryan McCreery said the company “…can’t wait for approval of the EIS [environment impact statement]. We must move forward with our plans.” He did not elaborate on how the company intends to “move forward.”